This is what your boobs should look like. High and huge, and positioned near or on a bucket of fries. Selling stuff (including hydrogenated fat-drenched fried potatoes) is what boobs do best.

But those boobs are covered with cumbersome cloth. Let’s get these puppies out for a stroll in the open air!

I know, let’s put stuff between the boobs too, and have some hands squeezing them! That will definitely get people’s attention! It is Perfectly Okay to use boobs to sell stuff because boobs are pretty and girls are pretty and pretty girls with boobs exist to please the corneas of the masses, amiright?

Oh, but actually? Boobs are cool but nipples are mundane because men have them too, and also they are pretty gross because they remind us of boobs’ primary physiological function…. 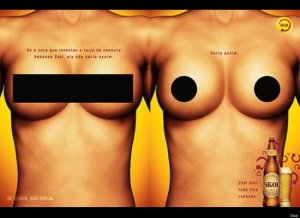 ….which is to eject milk directly into the mouths of our young, for nourishment, comfort and growth. Huuurrrrgh. Ain’t nobody got time for that!

WARNING: the boob you are about to see is not trying to sell anything!! If you are a hyper-masculine dude-bro or a sensitive lady pearl-clutcher, put your beer or mint julep down before you look, lest your retinas be damaged by the sight of non-objectified, non-consumerist, non-covered-up boobs.

I mean, honestly. How is babies feeding from boobies making anyone any money in this economy, or creating a viable market in which to exploit women for pleasure and profit? I tell you, it’s simply unacceptable in this day and age that a perfectly good breast could just be thrown up there for all to see it, without even having the DECENCY  to try to sell us something. The baby could at least hold a beer or some nacho cheese dip near the boob while he selfishly deflates it and reminds us that it’s attached to a woman with an identity and a FAMILY. And where is her nursing cover?! What an exhibitionist boob nazi, shoving it in our faces. Ugh!

I wish I didn’t have to impart this possibly upsetting information to you, oh Gentle Reader, but I’m afraid them’s the rules and we’re just the poor fools living under them.

4 thoughts on “Rules for your boobs”